After 50 years of breaking countless automotive records, being exhibited in The Louvre and being driven by James Bond, the Queen and the world’s greatest adventurers, Range Rover asked us to help it celebrate its half century birthday. No small task.

A vehicle that took 20 years of testing and prototypes before it was allowed to set its wheels on our roads can afford to look back on its heritage with misty eyes, but we wanted to ensure that our celebration looked to the future as much as it did to its storied past.

We proposed putting the full weight of The Times behind the campaign, utilising Times Radio, The Times paper and its digital arm, thetimes.co.uk, to showcase how this truly British brand has been “Leading the Way” its entire life, and how it has no intention of stopping now.

We launched our campaign with an 8pp in The Times Magazine, drawing on archive footage and a mix of awe-inspiring memories from the SUV’s trailblazing past. From its launch on June 17, 1970  to its feats of endurance, through desert and roadless rainforest, we told the gripping story of the much loved four-wheel drive.

So loved was the luxury SUV that, not content in being the Queen’s favourite means of conveyance, it starred in eight James Bond movies and was adapted for use by the Pope. Our eight-page spectacular enthralled our readers as they learnt of Range Rover’s myriad incarnations, too, including the Fifty, a special birthday edition of which just 1,970 examples were made.

In a series of print, digital and video executions running across The Times platforms, we partnered with some of Britain’s elite leaders, from the past, present and future to bring to life the brand message of “Leading the Way”. We kicked off in The Times Sport with World Cup winning rugby captain Martin Johnson, who opened up about the game he dominated for decades.

Alongside our spreads in The Times, we created a video series that started, fittingly, with the world’s greatest explorer, Sir Ranulph Fiennes. We told his remarkable story of adventure while traversing his home turf, Exmoor National Park, in a limited edition Fifty Range Rover. We heard that despite more than 50 years at the top of his game, Sir Ranulph, like Range Rover, wasn’t about to hang up his spurs – he plans to summit Snowdon on his 85th birthday. 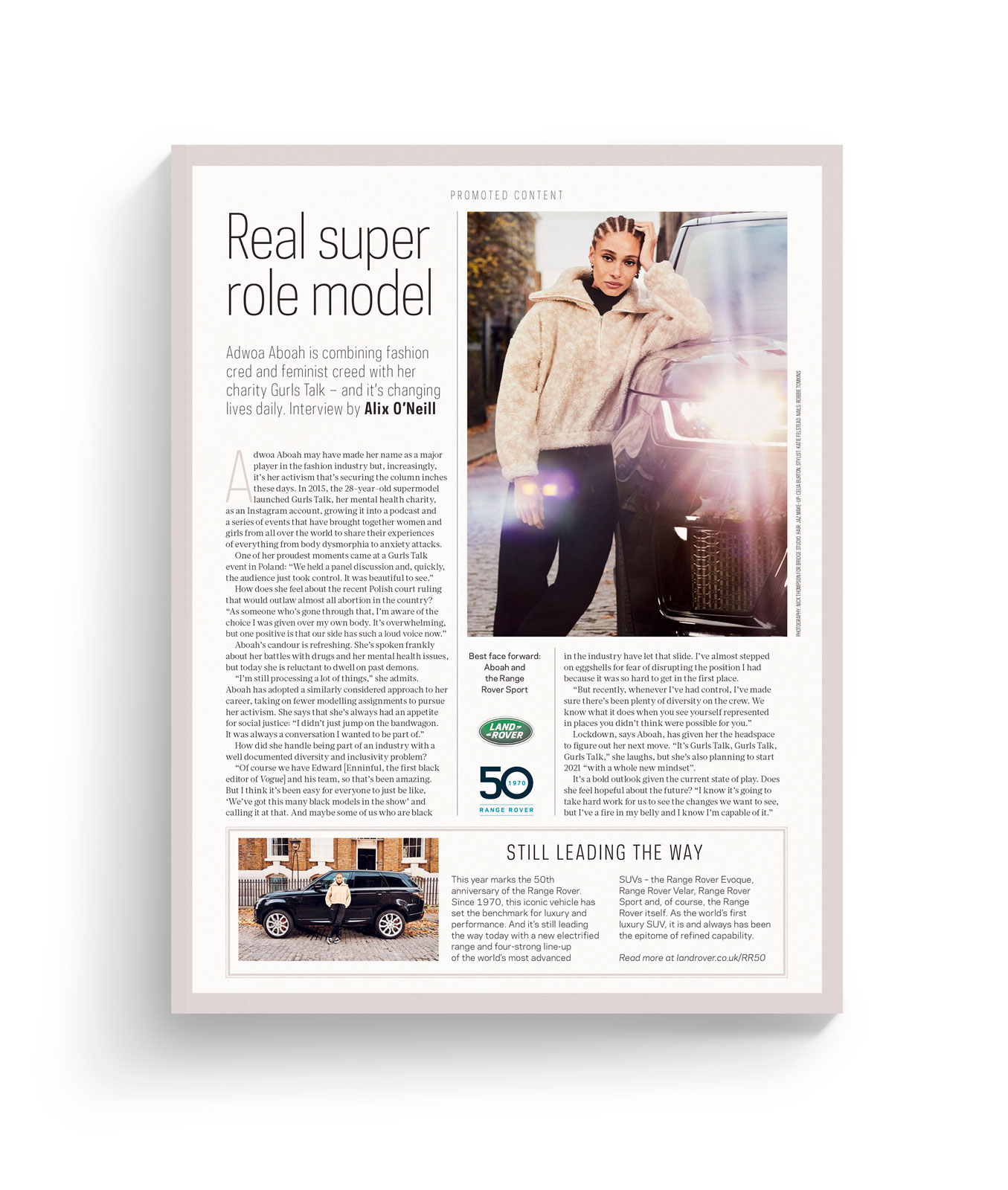 Oscar-nominated actor Naomie Harris talked to us about her illustrious career and how it felt to go toe to toe with James Bond. She spoke candidly about her decision to keep on reinventing herself as an actor and making sure she was breaking boundaries within film.

Adwoa Aboah, the model and activist, spoke out about the changing face of fashion and how her role within the industry has helped her to spread awareness of mental health issues. Her determination to remove the taboo from talking about a raft of subjects close to the hearts of young women makes her a modern-day leader.

We commissioned photographer Nick Thompson and director Jacopo Cinti to bring these editorial narratives to life.

We created a bespoke package on Times Radio for our John Pienaar and Cathy Newman Times Radio drive shows. Not only did Range Rover sponsor the shows – which included live reads twice an hour with partnership presence across all social and print show promotion – we created two new features to reflect our overall partnership.

These features, The Ladder, on Fridays, with Cathy Newman, and Leaders, on Tuesdays, with John Pienaar, featured many guests renowned as leaders in their fields, among them Naomi Campbell, Tanni Grey-Thompson and Alexandra Shulman.